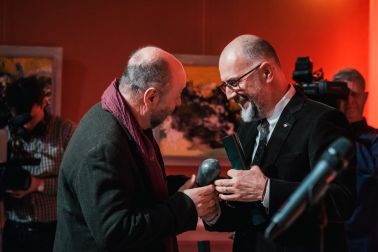 On the occasion of Hungarian Culture Day, Gábor Tompa was honored with the Hungarian Contemporary Culture in Transylvania Award, in the category of performing arts, a distinction founded and granted by the Hungarian Democratic Union of Romania (UDMR). The award was presented to the Artistic and Managing Director of the Hungarian Theatre of Cluj on the eve of January 22, during a gala event organized at the Central Park Casino.

The prize is awarded annually to artists who make a significant contribution to the transmission and promotion of Hungarian culture in Transylvania.

In his speech, Hunor Kelemen, who presented the award, stated the following: “Gábor Tompa works with the precision of the most skillful watchmaker, who not only knows the mechanics of it down to the smallest of details – or can even assign new functions to the well-known machine -, but he also experiences time from within. (...) A true Transylvanian. According to him, a statement also confirmed by his career thus far, he is a devoted follower of the Apáczai model, according to which works can be created at European and international standards even here, in beautiful Transylvania. Both as a director and as a theatre manager. Thus, Gábor Tompa is the 21st century successor of György Harag from this standpoint as well. ”

Our heartfelt congratulations to Gábor Tompa for the recognition!