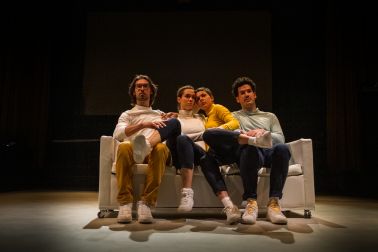 EUROPEAN FREAKS - LET'S SEND A MESSAGE TO BRUSSELS! – A PARTICIPATORY THEATRE PERFORMANCE AT THE HUNGARIAN THEATRE OF CLUJ

The STEREO AKT - Zimmertheater Tübingen’s production of European Freaks - Let's Send a Message to Brussels!, directed by Martin Boross, will take place on February 19, at 8 pm, in the Studio Hall of the Hungarian Theatre of Cluj.

“If a historian from the future were trying to judge the state of the EU based on the crises it encountered in the 2010s, he would probably not predict a great future for the union’s system. Is the brand of Europe truly a hollowed one, or is the European mindset experiencing merely a temporary low point? What happened to the idea of Europe?” – ask the production’s creators.

Due to its international aspect, the production has had several premieres, as mentioned in its synopsis: “The participatory theatre production staged with the help of civilian residents, created originally in Germany, together with Zimmertheater Tübingen, debuted at the special edition of the Hungarian language festival entitled Bánkitó Fesztivál, while its official theatrical premiere took place at the Trafó House of Contemporary Arts on November 26, 2019.”

The company is looking for Cluj city resident volunteers to take part in the European Freaks – Let's Send a Message to Brussels! performance!

The application form, as well as additional information can be found here.

Tickets for the performance can be purchased at the theatre’s ticket office or online at www.biletmaster.ro.