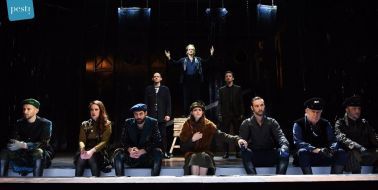 On Saturday, December 21, Gábor Tompa’s staging of Shakespeare’s Richard II will premiere at the Pesti Theatre.

The work is one of the rarely played pieces by the author, yet it stands out among the royal dramas through its poetic beauty. The fate of the young ruler is also the story of the struggle for power at a time when "English blood blackened on English swords".

The play focuses on a mysteriously exciting relationship between cousins and friends (who might also be in love?), that started at a young age, namely that of Richard and Bolingbroke. Director Gábor Tompa would like to shed light on this relationship, reveal it from a deeper, more meaningful standpoint, from its adolescent greed through its jealous thirst for power, onto the frenzied play that turned bloody.
The title role will be played by Miklós Vecsei H., while the Henry Bolingbroke’s character will be portrayed by Attila Vidnyánszky Jr.

We wish you all the best of luck for opening night!