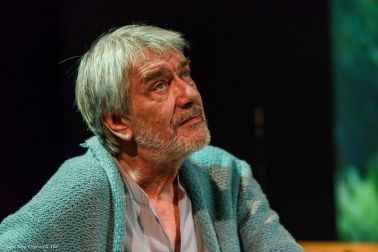 MARCEL IUREŞ IN A DIALOGUE WITH GEORGE BANU AT UTE FEST

On Friday, November 29, at 11 am, in the Upstairs Foyer of the Hungarian Theatre of Cluj, world renowned theatre critic and theorist George Banu will host a dialogue with actor Marcel Iureş, entitled VERSES, ROLES, LONESOME ACTORS. The event’s starting point was The Tempest, staged by Gábor Tompa for the National Theatre of Cluj-Napoca, where Marcel Iureş portrays Prospero, the protagonist.

The Tempest will take place on Thursday, November 28 at 7 pm, in the Main Hall of the National Theatre of Cluj-Napoca, within the programme of UTE Fest.
"What an emblematic example is Marcel Iureş who by acting alone does not limit his repertoire and passes from the enigmatic, interrogative text like those of Beckett or Bernhardt to extremely comic ones, like the stories of Ion Creangă, Ivan Turbincă or Prepeleac. " - writes George Banu.

Marcel Iureș debuted as an actor at the National Theatre of Cluj-Napoca in Tennesse Williams’ The Glass Menagerie, portraying Tom, and subsequently becoming a member of the company between 1978-1980. In 1995, he played in Mihai Măniuțiu’s staging of T. S. Eliot’s Murder in the Cathedral, followed by his return to Cluj 24 years later, to play in The Tempest.
Marcel Iureș said the following about acting: “I think acting resembles life because they both lack definite conclusions. Whichever his domain, the artist can't reach any conclusions. You can't verify on your own if what you did on the stage helped anybody, just like you can't be the transfixed witness of your own life. You can, however, witness the conclusion of your life. I don't care in the least about conclusions: who understood what, for whom it was useful. One of my grandparents used to tell me: "Do good in life, boy, as much as your brains and your heart help you to do that. Then squeeze the good in a cloth and lay it by the side of the road. Don't you dare look back to see who took it!" And then you find peace. I found it indeed from that point of view.”
The dialogue will address topics such as the actor’s work and lonesomeness, lonely characters that are "alone in a crowd", texts written in verse, and last but not least, the play that is considered to be Shakespeare's last will and testament, namely The Tempest.
The event is organized by the Hungarian Theatre of Cluj.
The main financier of UTE FEST is the Ministry of Culture and National Identity, the Government of Hungary, as well as the Cluj-Napoca City Hall and City Council.
Copyright © 2017 Hungarian Theatre of Cluj. All rights reserved