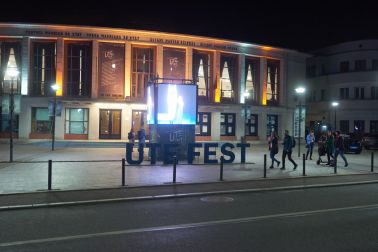 The 18th edition of the Union des Théâtres de l’Europe Festival continues to showcase plays that speak – even without the use of words - about the eternal war of the sexes, of rural life, but also honor and revolution.
Vladimir Mayakovsky's La Gaia Scienza - The Riot of Objects, staged by Giorgio Barberio Corsetti, Marco Solari, and Alessandra Vanzi, in a coproduction by Italy's FATTORE K. and Teatro di Roma, will take place in the Studio Hall on Thursday, November 21, at 5 pm and 10 pm, respectively.
“The desire to restore The Riot of Objects, the first performance of La Gaia Scienza, after so many years since its debut on March 24, 1976, at Beat 72, comes from its extremely light-hearted and not codified structure. There were no well-defined roles, characters, and performers, the script itself – a selection of phrases taken from the tragedy written by Mayakovsky – was a 'non-verbal material', to be either included or left out, repeated or omitted, in an extremely free, continuous improvisation.” - noted Giorgio Barberio Corsetti, one of the directors of the production.
On the same evening, at 7 pm, William Shakespeare’s comedy Love’s Labour’s Lost, directed by Andrei Șerban, will be presented by the Bulandra Theatre of Bucharest.

"The »war of the sexes« in Love's Labour's Lost is complex with a mysterious ending, not necessarily happy as one could expect from a comedy.The announcement of death interrupts the performance and finds us all unprepared, both actors and audience. For a modern audience, the title is much more familiar than the play itself, as the text is often regarded as obscure which could explain its rare staging (in Romania, at least), thus seemingly appearing as a play more to »read« because of the subtleties of language, an erudite puzzle, intended by the author to provoke and to make us aware of the way we distort the words' meaning, defacing the language itself." – stated Andrei Șerban about the performance.
The UTE FEST weekend lineup will be opened by the National Theatre of Northern Greece’s production of The Elephant, directed by Yannis Leontaris. The performance will take place on Friday, November 22 at 5 pm and 9 pm, respectively, in the theatre’s Studio Hall.
"The Elephant" is a comedy that reveals the dark side of the Greek province. A seemingly prosaic premise expands into hilarious dialogues that reveal all the stereotypes on which Greek society is structured: phallicism, misogyny, racism and national superiority.

On the same Friday, at 7 pm it will be Alfred de Musset’s Lorenzaccio stealing the spotlight. The play was directed by Boris Liješević at the Yugoslav Drama Theatre.
"I discovered Lorenzaccio in an old box of plays that had been sitting there for over a decade. I got it from Ognjenka Milićević nearly fifteen years ago. What drew me to it was the combination of momentous historical events and intimate moments; the dichotomy of the general and the personal. A father fearing for his children and a revolutionary are fighting for supremacy within the same person; a murderous tyrant and a boy desperate to preserve his soul and his good name." - wrote director Boris Liješević.
On Saturday, November 23, at 7 pm, the play Danton's Death by Georg Büchner will be presented to festival audiences. The production was directed by Nuno Cardoso for the São João National Theatre in Porto.
Nuno Cardoso (Canas de Senhorim, 1970) is one of the most sought after and prolific contemporary Portuguese stage directors. Over time, he has developed a personal and coherent aesthetic universe that tackles contemporary and classic texts. In his creative work, he examines the classical and contemporary repertoire in search of poetic fuel to feed a vision of the theatre seen as a machine for recognizing and rewriting the present.
The UTE FEST's detailed program and more information about the performances included can be found at www.utefestcluj-huntheater.ro.

The main financier of UTE FEST is the Ministry of Culture and National Identity, the Government of Hungary, as well as the Cluj-Napoca City Hall and City Council.
Tickets for the festival’s performances can be purchased at the theatre’s ticket office or online at www.biletmaster.ro. In the November 19 – 30 period, during the UTE Fest, the theatre’s ticket office will be open daily from 10 am until the beginning of the day’s last performance.
Copyright © 2020 Hungarian Theatre of Cluj. All rights reserved