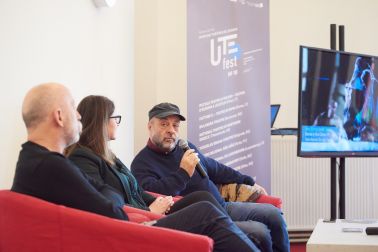 Organized by the Hungarian Theatre of Cluj, the 18th edition of UTE FEST - the Union des Théâtres de l’Europe Festival will take place between November 19 - 30. At the press conference preceding the event, Festival Director and UTE President Gábor Tompa presented the program of the event.

Gábor Tompa stated that a year ago the thought of organizing such a festival seemed a utopian dream, and that even though the budget was tight, it was certainly a huge leap forward to relaunch the Union des Théâtres de l’Europe Festival after an eleven-year hiatus.

On the day following each performance, András Visky, the artistic director of the theatre, will moderate talks with the artists and creators of each company; the conversations will take place in the theatre's upstairs foyer.

Emese Oláh, Deputy Mayor of Cluj-Napoca, emphasized the importance of theatre and culture in the life of the residents of Cluj-Napoca: “It is a rare occurence for Cluj-Napoca to be able to host for the second time such a prestigious theatre festival. Despite all the financial difficulties encountered this year, the local government of Cluj-Napoca felt that it was very important for Cluj and its cultural life to host the Union des Théâtres de l’Europe Festival here, therefore, it helped finance the organization of the event.

The UTE FEST's detailed program and more information about the performances included can be found at www.utefestcluj-huntheater.ro.

The main financier of UTE FEST is the Ministry of Culture and National Identity, the Government of Hungary, as well as the Cluj-Napoca City Hall and City Council.

Tickets for the festival's performances can be purchased at the theatre's ticket office (on weekdays between 10 am and 2 pm, and 90 minutes before performances), as well as online at www.biletmaster.ro.
Copyright © 2020 Hungarian Theatre of Cluj. All rights reserved