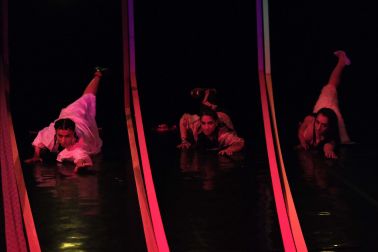 SEXODROM – A GUEST PERFORMANCE BY THE GIUVLIPEN ROMA THEATRE COMPANY

The Roma theatre company Giuvlipen will present the guest performance of Sexodrom, directed by Bogdan Georgescu, on the stage of the Hungarian Theatre of Cluj. The event will take place on Saturday, September 28, at 8 pm, in the Main Hall. The production is featured within the program of the 2019 Cluj Days and its entry if free of charge.

“Consider Sexodrom a sedition. Of bringing personal stories and intimate accounts into the public space. Of loudly telling your story when nobody wants to hear it.

Think of Sexodrom as a political declaration of love. Of telling one another that our lives and our sexuality can be a pleasant journey, and especially a safe one, whoever we are, regardless of our age, gender, sexual orientation, whatever our social or professional environment.

Take Sexodrom as an invitation to a grand unmasking. What are the Romanian #metoo stories that you never hear, that you never read about online? It is high time they were told bravely and frankly.” – write its creators.