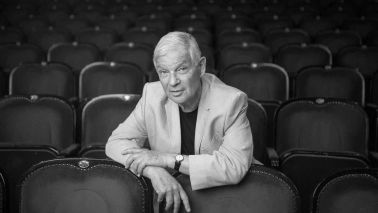 László Marton, Kossuth Prize-winning director, former manager and lead theatrical director of the Vígszínház Theatre in Budapest, died on Thursday at 76, following a long illness.
László Marton was the first to invite the Hungarian Theatre of Cluj to perform guest appearances at the Vígszínház Theatre, and he was also the initiator of the theatrical exchanges that still occur harmoniously between the two companies. Under his management, the Vígszínház Theatre first came to Cluj in 2000 with Caryl Churchill's The Skriker, directed by Sándor Zsótér. His last stage direction present on the Cluj stage was that of The Paul Street Boys.
May he rest in peace!

László Marton (1943-2019)
He has taught at the Budapest University of Theatre and Film Arts, as well as abroad in: Finland, Canada and London. He has worked several times as a guest director in Helsinki, Louisville (USA), Tel Aviv, Canada, Germany.
As a theatre manager, he sought to continue the old comedy theatre tradition. He had developed an attractive program for audiences, containing the classics, and musicals. His successful stagings include An Imaginary Report on an American Rock Festival, A Midsummer Night's Dream, Richard II and A padlás.
In 1975 he received the Jászai Mari Prize, in 1984 he was awarded the title of Meritorious Artist, while in 1990 the Artist of Merit Award, in 2000 he won the Hevesi Sándor Prize, while in 2003 he was awarded the Kossuth Prize. In 2004 he was awarded one of the most distinguished theatrical awards in Ireland, the Irish Theatre Awards.
He was an honorary member of the London Guildhall School of Music and Drama since 1990. In November 1997, he became a member of the American Society of Stage Directors and Choreographers, the first Hungarian theatre director to do so. Since 2001 he had been an artistic consultant for the Irish National Theatre. In 2009, the XIII. He was elected Honorary Citizen of the XIII. District, while in 2015 he became a corresponding member of the Hungarian Academy of Arts. In 2016 he received the Prima Primissima Prize. (MTI)
Photo: nepszava.hu
Copyright © 2017 Hungarian Theatre of Cluj. All rights reserved