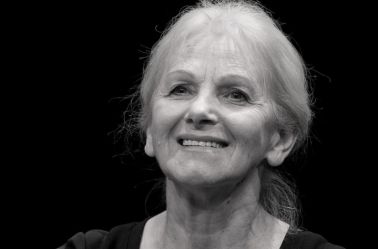 ÁGNES KAKUTS, HONORIFIC MEMBER OF THE HUNGARIAN THEATRE OF CLUJ, HAS PASSED AWAY (1939-2019)

The One Who Time Uplifted

An air of holiness enveloped her being. Her face remained beautiful, her features delicate; and somehow intricately timeless. For she must have accepted time as the immeasurable gift of being here. And whoever does so, as she no doubt has, realizes that time is first and foremost not all consuming, but uplifting.

She was, undoubtedly, uplifted by it, and those whose faces she looked into even once know it. So do others whose hand she held and to whom, with her angelic voice, said something that always rang direct, real and true.

She radiated purity and love, as well as a peculiar way of sensing people, of seeing through them, and not for the cruel purpose of judgment, but with the unwavering humanity of deep compassion and acceptance.

For which there truly is no explanation.

We use words like holy or holiness in similar contexts, and as we say them or write them down, we realize how ignorant we are of their true meaning. But we write it down and say it anyway, because the person of Ágnes Kakuts, our encounters and conversations recalled, her happy tears and her marvelously beautiful laughter substantiate the word’s meaning.

The words holy and holiness certainly remind me of Ági, indeed, and I instantly know that the meaning of the word is her, as she fills it with meaning.

I am speaking of a person who without holding anything of herself back, immersed herself in the depths of human suffering, and not even primarily as an actress – which would not by any means be a lesser feat! - but as a wife whose love and respect for her suffering husband László Czikéli did not waver, not even for a second. She accompanied him to the other side, without the slightest sense of grief, bitterness or revolt.

Out of love and not rejecting the suffering of the other humor, subtle moderation, and a pervasive gaze is born, a gaze the likes of which I have only witnessed in the saints who have come before me, who are still with and around me, and who mostly protect me from myself. And sometimes protect other people from me, no doubt.

I would like to believe that Ágnes Kakuts will also stay with me - I need her boundless, unmistakable giftedness.

Her stage appearances were permeated by this directness and transparency: the utterly exceptional virtue of not knowing how to tell lies. Which in her case was both an artistic and a truly human virtue.

As I am remembering her, without realizing it, I was writing about the Fruit of the Holy Spirit. Thinking of a human life that even though was taken by death, still cannot consume anything that she, the Lady Ágnes of our hearts, received as gifts and shared with the rest of us.

Let's enumerate the indestructible fruits of the Holy Spirit: love, peace, joy – yes, even in suffering! -, patience, kindness, goodness, faithfulness, gentleness and self-control. We have all nine.

Only Ágnes Kakuts is missing, but that is not true either, we know that the Creator who received her did not take her soul away from us.

Ágnes Kakuts was born on 16 May 1939, in Eremitu. In 1962 she graduated from the Acting Department of the Szentgyörgyi István Institute of Drama in Târgu Mureş,  becoming a member of the Székely Theatre of Târgu Mureş in the same year. In 1968, she began working at the Szigligeti Theatre in Oradea, and later, in 1976, at the Hungarian Theatre of Cluj. She was a member of our theatre until 1987, when she began working at the Petőfi Theatre in Veszprém, later performing also at the Csokonai Theatre in Debrecen, as well as the Bárka Theatre.

In 2000, our theatre awarded her an Honorific Membership, while in 2003 she received the Déryné Prize.