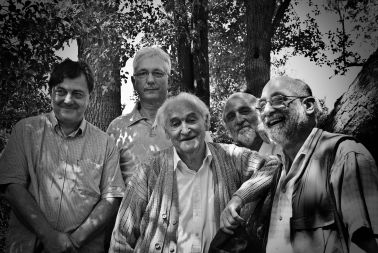 Actor Zsolt Bogdán and the Kaláka Ensemble will present a music and poetry event dedicated to the poems of Sándor Kányádi on Wednesday, May 15, at 7 pm, at the Main Hall of the Hungarian Theatre of Cluj.

For the Kaláka Ensemble, there has been no concert without Kányádi’s poems since the 1980s. Uncle Sándor became a decisive father figure in their lives. He dedicated many poems to the ensemble and they in turn traveled extensively with him, collecting numerous memories, sayings, stories from these encounters. Elveszett követ, Faragott versike, Valaki jár a fák hegyén, Dél keresztje alatt, Két nyárfa, Kuplé a vörös villamosról, Alma, alma… and many such poems became the lyrics for the ensemble’s songs.

In its 50th year of existence, the Kaláka Ensemble - Gábor Becze, Dániel Gryllus, Vilmos Gryllus, Balázs Radványi - decided to perform alongside Zsolt Bogdán, the outstanding Cluj actor, in Budapest at the Vigadó Concert Hall, and at the Hungarian Theatre of Cluj, in an evening dedicated to the greatest Hungarian poet of the Millennium, Sándor Kányádi.

Tickets can be purchased at the theatre’s ticket office daily between 10 am and 2 pm, as well as online at www.biletmaster.ro.